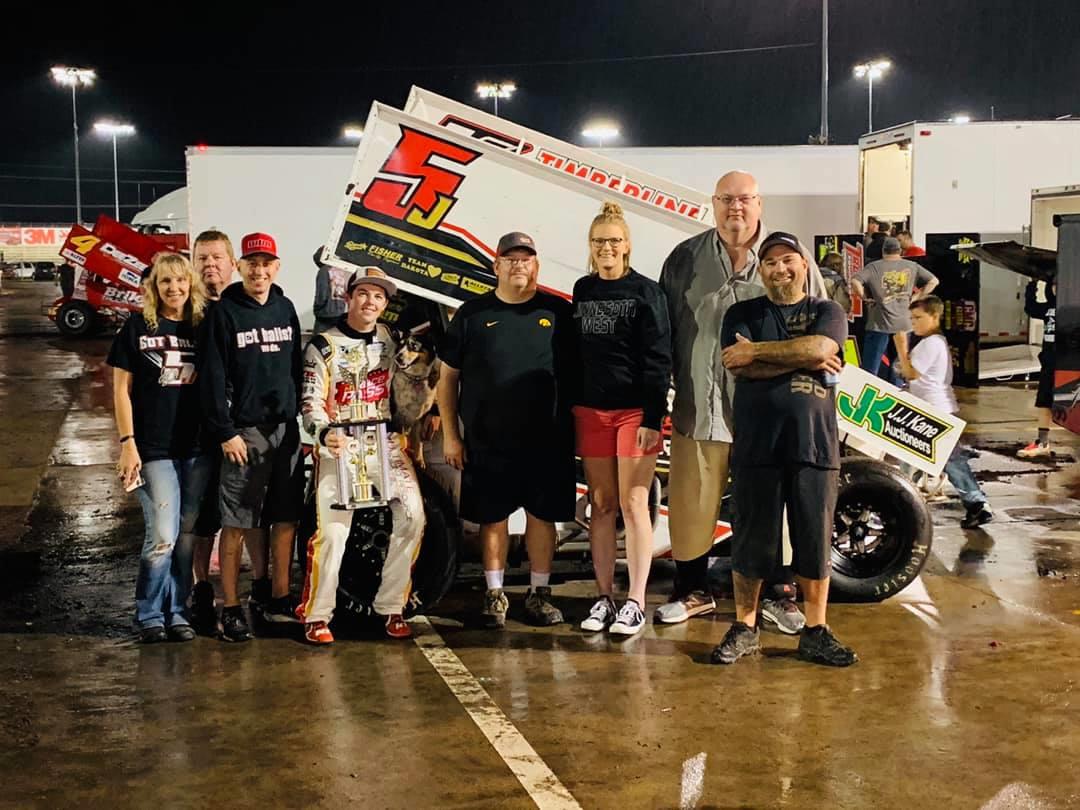 It capped a strong weekend that featured a trio of top-six finishes, beginning on Friday at I-80 Speedway in Greenwood, Neb. Ball opened the Speedy Bill Smith Memorial by advancing from fourth to second in a heat race before he finished sixth during the Carpet Land Nebraska 360 Sprints main event.

“We had a decent race car all night long,” he said. “This was the first race of the year for us at I-80 and we really love this track.

“The top was really fast and we wanted to get to the top right away on the start of the main, but just couldn't so we dropped to fifth right away. We had a fun battle with Stu Snyder for literally the last 15 laps of the 25-lap feature. It was some good, clean racing with Stu there for a top five, but he was just able to edge us on the last lap.”

Ball returned to his home track of Knoxville Raceway for championship night and a double feature night on Saturday.

“We are still working the kinks out on our qualifying effort trying to restore it to what it has previously been like from 2017 and before,” Ball said after qualifying 14th quickest out of the 38 cars. “We are making the right strides and all night long our car got dialed in more each time we hit the track.”

Ball’s qualifying efforts lined him up on the inside of the second row for a heat race. He went on to win the heat race with a last-lap pass.

“Before the heat race we made some good adjustments and were able to win yet another heat race,” he said.

Ball started the A Main from the inside of the fifth row. He was able to pick off a couple of positions to finish sixth.

“For the first feature it had its highs and lows,” he said. “I believe we were up to fifth at one point racing with Wayne Johnson and dropped back to ninth after a bad restart. However, we found the top line the last half and rebounded for a sixth-place finish. Luckily we learned a few things for the next feature that we were lining up on the outside of the front row.”

The second feature was a make-up race and Ball took advantage of his great starting position to claim the victory.

“What a race,” he said. “From the drop of the green Larry, Jody, Jacob and Jeremy had the No. 5J on rails. I haven't had a car that good in many years. We took some things we learned from the first feature and applied them. Knowing we had a good opportunity with a front row starting spot we were determined to win. We led from the drop of the green and was able to hold off the best to ever drive a 360 at Knoxville Raceway – Clint Garner.

“We had a restart at halfway and Garner got side by side with me, but we edged him in turns three and four and never looked back. I was able to utilize what I call the ‘Shane Stewart Line’ in turns three and four and that really helped pull away and maintain the lead until yet another red flag on Lap 17. This previously rained out race would ultimately end on more rain with the race being called complete with 17 of 20 laps in the books. It sure felt great to win the last race of the year at Knoxville Raceway in 2019. Especially because we plan to be back at Knoxville Raceway in 2020 competing for our first Knoxville Raceway 360 track championship. We have a few things to work on and fine-tune over the winter and beginning of next year, but we are on the right track. My team has been working so hard lately and they deserve this win. It felt great seeing the smiles on their faces when I pulled back into our pit area. I have to thank Jacee, Mom, Dad, Jody, Josh, Jacob, Jeremy, Jimmy, Ralph and Terri for always sticking by my side and supporting me like they do.”