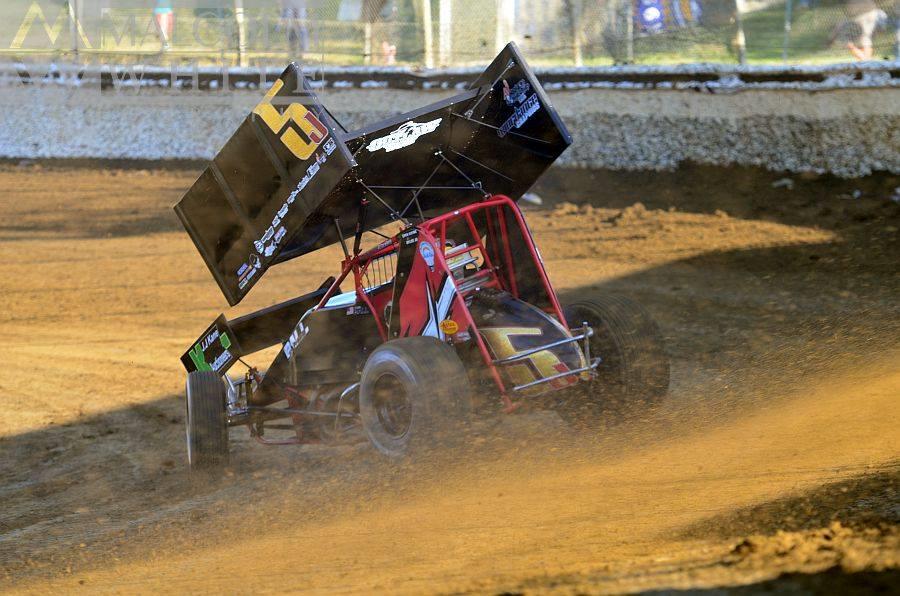 The White Lightning Motorsports driver kicked off a four-race week last Tuesday at Dubuque Motor Speedway in Dubuque, Iowa, with the Sprint Invaders. He finished second in heat race action before ending third in the dash. Ball started on the outside of the third row for the feature and he recorded a top-five finish ending in fifth.

“We have always raced well at Dubuque, never finishing out of the top five and earning one win over the last four years racing there at their fair race,” he said. “The track started out awesome with a fantastic cushion before the bottom came in during the A Main. It was just a very fast track and difficult to pass on as everyone fought for the bottom.”

Ball ventured to I-80 Speedway in Greenwood, Neb., with the Carpet Land Nebraska 360 Sprints on Friday. He advanced from fifth to third place during a heat race before capping the night with a runner-up result in the main event.

“I-80 Speedway has been very good to us the last couple years and after getting our first win of the year there in April we were eager to return,” he said. “There was a very talented field of drivers on hand so we knew it would be tough. The heat went well and we made the redraw and drew the No. 3. Chris (Martin) and I always race each other very hard and I knew it would be a tough battle with him. Chris got to the lead and I got to second right away and I trailed him for a while with us both running the cushion. Chris just got through lapped cars much easier than I did and we couldn’t catch him, but hung on for a solid second-place finish.”

Ball returned to his home track of Knoxville Raceway in Knoxville, Iowa, on Saturday. He qualified fifth quickest out of 44 cars and started on the outside of the third row in his heat race. He moved forward in the heat to place fourth before gaining a position and ending sixth in the main event.

“As always I was eager and excited to return home to Knoxville Raceway,” Ball said. “It was our last tune-up before the 360 Knoxville Nationals. Our qualifying effort was excellent as we timed fifth, went forward in the heat and the A Main started off good until about eight laps in. Then I just made too many driver errors and overdrove the car and put it in bad spots. We learned some things from our new crew chief, Rob Hart, and I feel fortunate to have made some bad decisions during a race the week before 360 Nationals. We are more prepared than we have ever been going into this week and we look forward to the challenge of making our fifth consecutive 360 Nationals A Main start on Saturday night.”

To round out the weekend, Ball jumped back into competition with the Lucas Oil ASCS National Tour presented by SawBlade.com on Sunday at Mason City Motor Speedway. He finished where he started – seventh – in a heat race. Ball took the green flag of the A Main from the inside of the seventh row and advanced two positions to finish 11th.

“Once again we were at a new track in Mason City,” he said. “We simply struggled to find speed all night long. We’re really hoping to use the next week to dissect the car and be ready for when the ASCS National Tour returns on Aug. 7 for the Ultimate Challenge at Southern Iowa Speedway in Oskaloosa, Iowa.”

“Last year we had another solid qualifying night and I was the top point guy after Thursday night at 360 Nationals,” Ball said. “We lined up fourth and would peak as high as second before falling to fifth in Saturday’s $15,000-to-win A Main. Although we haven’t been racing at Knoxville Raceway nearly as much in 2018 we have goals set very high once again and are expecting to be competing up front for the win come Saturday night. It simply feels good to be back home at Knoxville Raceway for the next couple weeks. It is exciting to be able to be going for our fifth consecutive 360 Nationals A Main start come Saturday night.”