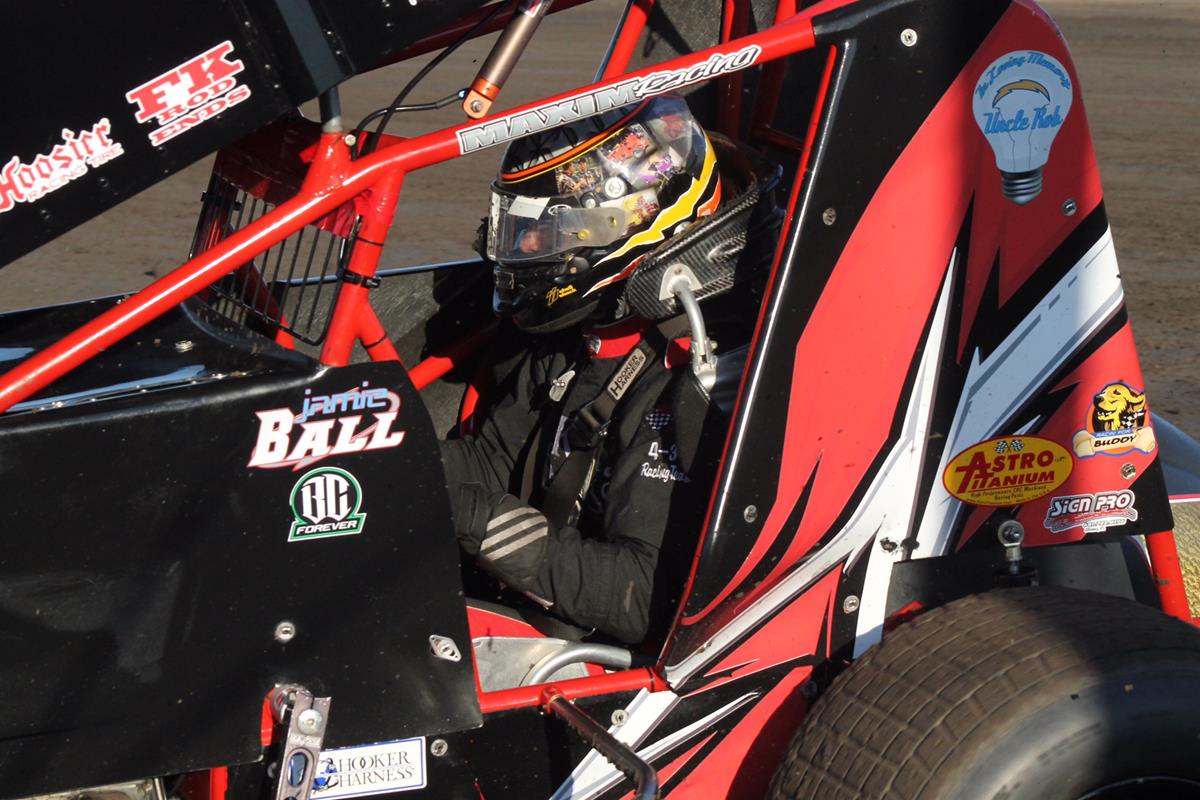 Inside Line Promotions – WEST BURLINGTON, Iowa (May 31, 2017) – Jamie Ball produced a very successful and consistent weekend, racking up a trio of top-five finishes with the Sprint Invaders and four top 10s in four races.

Ball kicked off the action on Wednesday at Southern Iowa Speedway in Oskaloosa, Iowa, with the Sprint Invaders. He started on the pole for a heat race, but was penalized a row for a jumped start. He finished where he restarted – third.

“Our last two races at Osky we won and finished third so we had some pretty high hopes going into this race,” he said. “The heat race misfortune caused us to miss the dash.”

Ball started the feature from the inside of the sixth row. In a green-to-checkered race, Ball maneuvered his way to the front to score a fourth-place result.

“My guys gave me a great car, but we just didn’t have the starting position we needed to be able to mix it up with the McCarls’ and Ian Madsen,” he said. “Overall, it was satisfying to be able to work our way from 11th to fourth.”

White Lightning Motorsports continued its weekend with the Sprint Invaders on Friday at Lee County Raceway in Donnellson, Iowa.

Ball placed second in a heat race after starting on the pole. He then advanced from sixth to third place in the dash.

“Lee County is one of the most fun race tracks the Sprint Invaders visits each season,” he said. “We had a great night going for us. Every time the car hit the track it just kept getting better.”

Ball started on the outside front row for the feature and jumped to an early lead.

“The top was the fastest way to get around that place so I knew we were in a good position for the start,” he said. “We jumped out to the lead early on and began to navigate traffic, which showed to be going our way. I cheated the cushion a little bit and got sucked into the wall and unfortunately (Terry) McCarl was able to get past us for the lead.”

Ball was able to regain control and ended with a runner-up result.

“That was a disappointing second-place finish,” he said. “It’s difficult to run 25 hard laps, especially when you have a veteran like Terry McCarl and then Chris Martin right on your tail waiting for you to make a mistake.”

Ball and WLM returned to their home track of Knoxville Raceway in Knoxville, Iowa, on Saturday. Ball qualified ninth, placed third in a heat race and ended sixth in the main event.

“We have been good at Knoxville this year, but we haven’t been great,” he said. “Our qualifying effort has been inconsistent and that is something we are working on.

“We were fast in the feature, but just missing some top-end speed compared to the top-five guys. I know with the guys behind me at WLM that we will be on the top step of the podium before you know it.”

The weekend wrapped up on Sunday at 34 Raceway with the Sprint Invaders. Ball won a heat race before he placed second in the dash. An excellent pill draw put Ball on the pole for the feature.

“Again, we jumped out to an early lead and had to make some crazy moves and slide jobs to work our way through lapped traffic,” he said. “A bobble in lapped traffic would allow
(Chris) Martin to make the pass for the lead. I knew I had to catch up and make a move to get by him. Unfortunately, that move didn’t play out to my favor and sent us spinning.”

Ball had lapped up to fifth place prior to the spin. He rebounded to end the night fourth.

“It was so much fun to be one of the top cars at four different tracks,” he said. “That right there is a testament to the hard work and dedication of our team paying off.”

Ball is scheduled to race at the 39th annual Jackson Nationals this Thursday and Friday at Jackson Motorplex in Jackson, Minn.; on Saturday at Knoxville Raceway and on Sunday at Double X Speedway in California, Mo.

He will also compete this Saturday at Knoxville Raceway.

Thursday and Friday at Jackson Motorplex in Jackson, Minn.; Saturday at Knoxville Raceway in Knoxville, Iowa, and Sunday at Double X Speedway in California, Mo.

“Russel and his crew at Outlaw Wings have been great supporters of ours over the years,” Ball said. “We have been running strictly Outlaw Wings since 2012 and have put them in Victory Lane 30-plus times with five drivers. Russell and his crew are good people whom we consider friends. They provide great customer service, the best product available and they do it at a fair price for the average racer. Outlaw Wings is the choice of winners throughout the country.”

Inside Line Promotions specializes in affordable public relations and media management for motorsports drivers, teams, sponsors, tracks, series, events, organizations, and manufacturers. ILP Founder Shawn Miller leverages professional journalism with the new media technologies and social networking to improve your exposure and the return of investment for your sponsors.

To meet the media relations needs of your program by joining Team ILP, contact Shawn at 541- 510-3663 or Shawn@InsideLinePromotions.com. For more information on Inside Line Promotions, visit http://www.insidelinepromotions.com.